Editor's Pick: 10 of our favorite Veterinarian Hospitals in the U.S.! 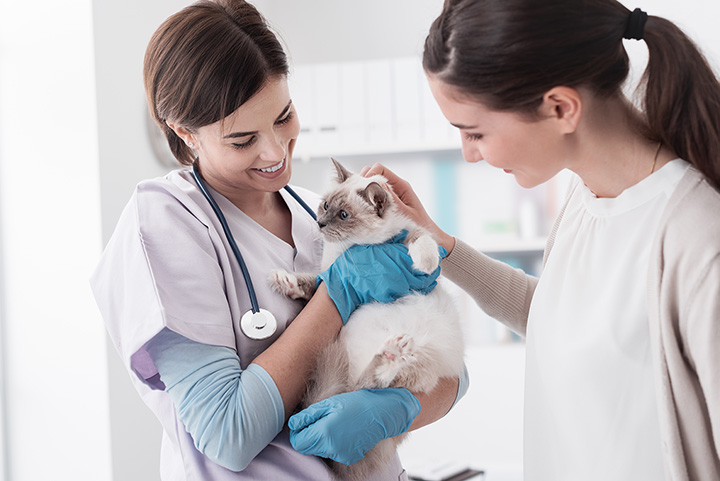 No doubt about it: we love our pets. As in, spending upwards of $60 billion on them each year. That's a lot of squeaky toys and kibble.

The average annual cost of caring for a dog ranges between $500 and $1000 per year (and that's after their first year care costs, which can spike into the thousands of dollars). Kitty costs are somewhat less, running to about $300 per year - minus unforeseen emergencies. Of course, pet parents would do pretty much anything to keep their animal healthy and happy, money be damned.

There are somewhere in the neighborhood of 20,000 veterinary facilities in the U.S. Those dedicated doctors and technicians are tasked with treating everything from a bad tooth in a cat to fleas on a dog to egg binding in a female iguana (yes, it's a thing). We want our animal to have the best experience possible when they have their doctor visit; the following hospitals are doing the kinds of things that will result in some happy tail wags. Well, almost.

It's set in a redesigned 1850s Victorian home. The waiting areas are set up like a comfy living room, with squishy couches and a fireplace. And there are two of them, one "parlor" just for kitties, the other for dogs. They also offer acupuncture and herbal medicine treatments.

Dr. Andrew Kaplan regularly appears on Big Apple lists of "best vets." He founded this facility in 2003, treating the pets of the residents of the swanky Upper West Side. But Kaplan and his team are committed to helping less fortunate animals through The Toby Project, which does low or no-cost spay/neuter throughout the city as a way to reduce the population of homeless animals.

For decades, it's been the go-to place for the pets of the city's rich and powerful. Their annual charity gala always attracts society's elite; back at the hospital, the animals are treated to cutting-edge medical technology, like an underwater treadmill.

Animals should feel right at home: this facility is built around a restored19th century barn. Well, at least that's the waiting area. The original grain silo has been converted into a library and research space, while a replicated milk barn serves as the treatment and surgical area.

It's one of the few animal hospitals that can claim a listing on the county's register of historic places. Set within an old train station from 1893, the refurbished building still features plenty of vintage touches, like the original fixtures. And the animals don't seem to mind that the train still passes by a few times a day.

Pets stroll into this facility and think (maybe) they're going for a walk outside. The support beams look like trees. The ceiling is painted sky blue and the exam rooms are designed to look like cozy cottages. It's all meant to ease the cold, clinical environment that sends so many animals into a peeing-on-the-floor panic.

They've been in the area for decades, but their new facility (opened in 2013) really gets "two paws up" for ingenuity. Besides keeping cats and dogs separated (thus reducing vet visit stress), they've incorporated a dog water fountain, fire-hydrant "restroom" and a birdfeeder viewing area for cats.

The home office of Dr. Marty Becker, known as "America's Veterinarian." You may have seen him on shows like "Dr. Oz" and "Good Morning America" or read one of his 22 books. Becker is a leading proponent of the "fear-free" practice: redesigning animal hospitals to make them more in tune with pet needs (such as, examining animals at ground level on yoga mats vs lifting them on to cold metal tables).

It's a former restaurant turned pet hospital. Now, the outdoor patio is a play area for boarded animals. The bar is where pet parents check in. There are separate entrances for dogs and cats to keep the mayhem to a minimum. Oh yeah, it's run by former senator John Ensign, an animal lover who's returned to his veterinary roots.

At 42,000 square feet, it's the biggest animal hospital west of the Mississippi. That size comes in handy, since the Los Angeles Zoo has been known to rush its large clientele in for emergency treatment. It's one of the very few pet hospitals to offer bone-marrow transplants, as well as a psychology team. Hey, that term "crazy like a fox" started somewhere.